A Short History of Shotokan Karate 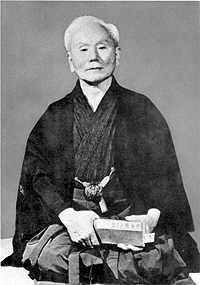 Gichin Funakoshi is widely considered as the “father” of modern day karate. He was born in the Shuri prefecture in Okinawa in 1868 and at the age of 11 began to study Karate under two of Okinawa’s top masters. In time, he became a master in his own right and in 1922 he was invited to demonstrate karate to the Japanese public for the very first time. The demonstration was such a success he was invited to stay in Japan and teach, which he did with great success.

For Sensei Funakoshi, the word ‘karate’ eventually took on a deeper meaning than just martial arts training, transforming into what is has become known as karate-do, the ‘way of the empty hand.’ He was to modify the Okinawan art by taking inspiration from traditional Japanese budo (kendo, judo, etc) and integrated their philosophical aspects into his and his student’s training. This became a total discipline, which represented a synthesis of Okinawaan and Japanese schools and in 1936 he established the ‘SHOTOKAN’ style of Japanese karate which was to be greatly influenced by his son Yoshitaka (Giko) and Masatoshi Nakayama, first headmaster of the Japan Karate Association.

Whereas his father was responsible for transforming karate from a mere fighting technique into a philosophical martial ‘do’ (way of life), Yoshitaka was put in charge of developing, helped by other important martial artists, a karate technique that definitively separated Japanese karate-do from the local Okinawaan art, thus giving it a completely different and at the same time notoriously Japanese flavour.

It is upon these concepts that in 1948, the Japan Karate Association (JKA) was founded. The establishment of the JKA lead the way to the spread of Shotokan karate throughout the world. Master Masatoshi Nakayama, one of Funakoshi’s greatest students, succeeded him as the headmaster of the JKA and during his time there he further developed Shotokan, based on his own research, into the style we know today.

It was through master Nakayama’s vision, that Shotokan has spread throughout the world by enriching many people’s lives in many countries, while other senior instructors stayed in Japan at the Sohonbu to teach the next generation of Shotokan masters.